The AIMP is an audio player that supports most popular media formats for Windows . The program is also capable of playing Internet radio as well as record programming. In AIMP users will see major changes, such as customization interface, ability to create lists and search music and even use keyboard shortcuts.

The program can perform the conversion of various audio formats and has a friendly and modern interface, not to mention the equalizer 18 bands, creator of embedded effects, editing MP3 tags, support for playlists, fade between tracks, between other resources.

This player is very light, so it does not occupy much space on your computer. The look of the interface is similar to the player Winamp , with orange and gray colors. All basic functions are provided to be easily used form.

It has several features that make it a player truly innovative. One concerns the playlist, which has markers that enable disable and enable music anytime.

Another unique feature is how the playlists are organized. With the paging AIMP you can navigate between them without difficulty. Also gives the effect “crossfade” which decreases the volume of the music that is ending and increases the next song that will be performed. Despite being a great resource, it can be disabled by unchecking the “Use fading” in the “Playback” tab.

Some of the formats supported by AIMP are: MP1, MP2, MP3, OGG, WMA, WAV, FLAC, APE, XM, WV, APE, MID and UMX. Besides working with playlists in M3U, PLA, PLC and PLS formats. It also supports plugins that add more improvements to the program.

Their functions can be used as shortcuts, making playback more dynamic and practical audio. The most common commands that support shortcuts are the increase and decrease the volume, fast forward and rewind songs and give play or stop.

Just like Windows Media Player , AIMP features effects of fractal visualization, which is based on sound waves of the song playing. That way you guarantee a full screen visual effects that accompany the rhythm of your music.

With this tool, you can rip songs from your CDs or convert their formats. It accomplishes this task to MP3, OGG, WAV and WMA files. It also allows the modification of the frequency, bit rate and (stereo / mono) mode.

Like the converter, the recorder supports most popular formats as input and output. With it, you can change frequency, input microphones, sound boxes and other devices, volume, signal level, quality, processing rate, and bit rate.

With this tool you can rename and enter information in audio files such as artist, album and title. It is fully integrated with the converter and recorder, making it easy to search for files and organizing your entire collection.

The news revolve around Windows 7 users, the new version of Microsoft OS and the reformulation of codes that promote faster time to use the player.

No new interface, the highlight of the AIMP also includes compatibility with most versions of operating systems, the interaction with the Aero interface and bug fixes.

New look and transition effects offer a look and better management of the playlist. The skins and audio formats are still available and are recognized as the largest differential of the program.

Besides keeping the system dynamic lists that has become one of the symbols of the program, it is hard to think of a compatible with many formats of audio program. 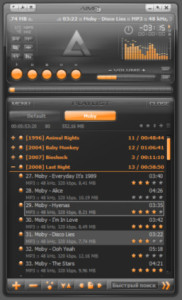