The RealPlayer is a program that lets you play the main types of media including Windows Media , QuickTime , Flash , MPEG-4, DVDs and CDs, and watch videos in high definition using a broadband connection. Just download RealPlayer on your Windows , Mac , Linux or Android , and have access to all videos in one place.

The software provides a good user experience with the player and the internet. It allows you to download videos from thousands of sites. From the downloaded files, you can build a library with a playlist to listen to later.

The service recognizes the audio and video of the most popular market and has Flash support. Furthermore, there is the possibility of using DVD video recordings, SVCD, VCD.

The RP is perfect for viewing and sharing your videos with friends from Facebook and followers of Twitter . With the new drive, you can copy online video to your iPod, cell phone, Xbox , PS3 or any other device. Not to mention that this version integrates with social networking. And thus allows the user to see their videos anywhere.

There is a function to pause, rewind and fast forward audio clips or live video during playback. You can even transfer music and videos automatically to your library iTunes .

Like any other player, and play music and videos in various formats, RP still plays your favorite CDs and DVDs. Just put in your computer’s driver and open it in the program.

It is still possible to download your favorite videos from YouTube and many other sites, organize them and watch them anytime, anywhere. Just log on to YouTube (or other video site) and leave the mouse cursor a few seconds on the video being played. After this, a window appears saying “Download This Video”. After that, just click and start download it to your PC.

Do the simultaneous download of several videos, including Flash videos. Several videos and games are available for download. However, only for users who joined in the full service option, RealPlayer Plus. This is a paid service, but the games can be tested for free.

This program works as an entertainment center in your computer. You can create your library playback and watch it even without having to use another player. In addition, the player is a great way to organize your music and videos, gifts on your PC.

It is so complete that it has a recording function, in which you can create CDs and DVDs with their favorite content. For this, choose the music files and favorite video and make your selections. The software also provides access to content of the program itself as videos, music and even online games. To have it all in your PC just download the service.

Download RealPlayer and has an excellent program for viewing videos!

One of the oldest players in the market, RealPlayer has been innovating ever more – and always keeping on top of the race of their service. In addition to supporting the majority of video formats, the program allowed to download videos from YouTube and view them on Facebook.

Among all the new releases of the software, it still has a simple video editor. This allows the user to modify what you are watching and share these changes on your Facebook profile.

This integration with the social network Mark Zuckerberg filters updates from all your friends. Thus, the application allows only viewing of uploaded videos – videos are displayed in the player, but to interact (commenting and enjoying) a new window is opened in the browser.

The program also offers a private way. This ensures user privacy, since all downloads are directed to the library and are password protected. The history of watched videos can be deleted in accordance with the will of the user. It is worthwhile to download RealPlayer! 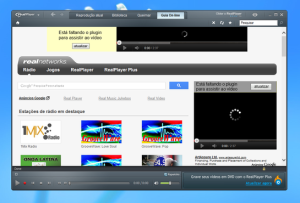