In the time we have to bridge the official launch of Android 4.4 KitKat we see that gradually increasing share of Android 4.4 see the light. Thus we have seen an early logfile of the new version of Android appear and it appeared that we had spotted.’s New SMS and telephone interface 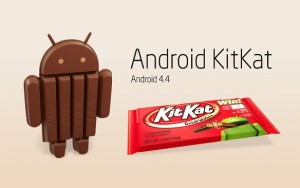 Google has the habit of the interface of its existing standard Android Applications, this purpose I draw. Equal on Google Hangouts, Google Plus, Google Maps or Gmail for example, as much as possible Icons, menu items, names and the rest of the user interface display as much as possible in the same way and used. This ensures that the user can quickly find the applications or go her way and also will feel at ease.

We see weekly if not daily new bits of information popping up on Android 4.4. KitKat. The last surfaced piece Android 4.4 KitKat information is probably surfaced screenshot of the Android 4.4 Downloads interface. Here you can monitor the status of your downloads in the holes and also view the previously completed downloads.

In the now surfaced Downloads screenshots of the interface we see now that Google has made some changes. So Google has chosen the so-called light-Holo theme further implement the existing standard applications. By There is also added a sort button that sorting can be adjusted. This sorting function was at the bottom of the application to previously seen. Finally we see on the top right now a new button with four squares that can be used to probably the ‘CARDS’, tile, and list view. Playback adapted Other applications also turn?
It seems that Google called the Holo theme still goes implement in Android and thus the standard Android Applications. By We can wait but most likely will include the design of Google Calendar / Calendar, the stock Android browser and many other standard Android Applications in the coming period will be transformed to the Holo theme. A very positive development that we certainly welcome here.