In this new title is followed by the story of Star Wars , so it will include approximately 30 new characters and over 80 levels with different scenarios, weapons and powers that will make the game more entertaining when you complete missions, decorated with the film music background. 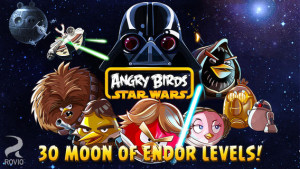 But surely, perhaps what stands out is ” The Porkside “the character who plays Darth Maul and the ” Telepods “which are small action figures of Angry Birds with the theme of Star Wars characters will distribute Hasbro in different countries necessary to complement the interactive gaming experience.

Angry Birds Star Wars II is now available for devices Android, iOS and Windows Phone 8 from their respective app stores, where as usual for Android offers a free version and a paid in 13.26 pesos with better graphics, while for iOS costs 13 pesos and Windows Phone 8 , 15 pesos .