The Nero 2014 Platinum is a program, available for Windows , which allows you to edit photos, videos and audio files, and burn them to CD, DVD and Blu-Ray. He has several integrated tools in one place, that organize, manage and manipulate your multimedia files of all types. This is the latest version of the application suite that promises to transform the user experience compared to that offered its predecessors, be sure to download Nero and try it!

With it, you can burn a DVD, CD or Blu-Ray with your music and files. Additionally, you can save them on your computer or even broadcast to other devices such as smartphones, tablets and TV to your living room. Highlights of this new release are the features video conversion, editor and videos, backup and recording in one click.

Other basic functions like recording multiple formats of audio, video and image, and saving. Iso file on the PC are present with some minor improvements. On the issue of recording, the software also allows you to copy discs and choose what you write, some content if the original media is unnecessary and can be deleted to fit on a smaller disk.

Moreover, you can also save videos from YouTube to watch offline. The interface is divided into four categories: Manage and Play, Edit, Convert, Print and Engraving, and Backup and Restore. On this same screen, no way to easily access other options like tutorials service settings.

Jumping on the bandwagon of 4K resolution, Nero offers users the Platinum version, which lets you manipulate video in Ultra HD resolution. Furthermore, the extended version can read Blu-ray 3D discs and transfer files to the servers of Nero, to save disk space.

The Platinum package offers a variety of audio and video, as Seamless Music, which automatically adjusts your music as designed. Users can also synchronize image with the rhythm of music and create professional videos without understanding much editing.

Designed for any type of person, the more inexperienced the most demanding, the program can replace several other software at once. Thus, it facilitates the user’s life and delivering quality home at a professional level productions.

To test the product for 15 days for free, just click the link at the top of the page to download and provide a valid e-mail. After the evaluation period, there is a chance to buy the license through the service itself. Download Nero 2014 to check it out!

Nero 2014 Platinum is definitely the best version of the suite of applications ever released. Its interface is easier to navigate, especially for the average user, and your resources are more varied than ever in previous packages. It is a good option for those who want to replace multiple programs at once and add several utilities in a single environment.

The video converter can be quite useful to avoid compatibility problems between, for example, the edited video player and your mobile smartphone. You can edit the file extensions of your library in just a few steps, and the system offers a multitude of formats supported.

The editor of pictures and videos is quite complete. Its great advantage is the ease of use combined with a relatively wide range of editing features such as transition effects, storyboard, and multiple audio tracks. Functions should please both amateurs and experienced users.

Another important function is the file explorer offered. With it, you can do a scan on your entire library to find the desired content. Moreover, it is simple to make backup copies of your files to CDs or DVDs

With the popularity of high-definition TVs, the TVs have become the best way to watch movies in HD, and Nero 2014 has a very interesting feature that helps in time to consume content on the big screen. With a few clicks, no way to stream videos, music and pictures in multimedia player running on servers connected to the same network in a simple and efficient way.

In this version, Nero included a nice feature for those who do not like to spend time going through physical media or content from your computer to their gadgets. With one simple step, you can transfer files from your library to your device without worrying about whether the OS will read – you can preprogram Nero to recognize which system is connected to the conversion automatically.

Our caveat, however, goes to its size. How to meet so many applications, it would be surprising if the program were not heavy either at the time of installation and use. Despite the developer indicate that the product is compatible with Windows XP, it is difficult to believe that machines running such an old version of the Microsoft OS can run it without gagging heavy or even install it.

However, if your PC is minimally recent and averaging settings – as a dual-core processor – it will be able to run the software features without major problems. The download is definitely recommended, especially for those looking to replace several apps for a single product, maybe even save disk space after some substitutions. 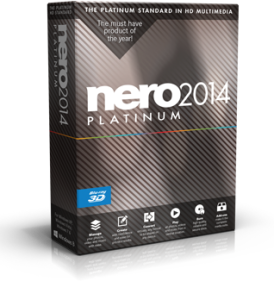