WinSuitz is an application that mimics parts of the new interface of Windows 8.1, allowing users of older versions of Microsoft’s operating system experience a little of what the update holds for them.

You have the colored tiles, but without animations and real-time information, such as Windows 8.1 updates. Still, you get a number of shortcuts for your current operating system functionality, allowing you to access your Control Panel, applications such as calculator, voice recorder and others.

You can not, however, put the window in fullscreen app, is displayed as the Start screen of Windows. You can not rearrange the tiles or do any customization in grid applications and shortcuts.

The app does not need to be installed on the computer, requiring only run it to gain access to its facilities.

WinSuitz is an interesting tool in its concept, but extremely basic in its execution. The app tries to mimic the operation of the Windows 8 Start Screen, but can only display a simplified version of the appearance of this element, since virtually none of the real functions of the Start screen work here.

Instead of live tiles, the user receives a grid of shortcuts that leads to functions in the system, such as Control Panel and a few other native Windows applications. The highlight in the new Windows interface is precisely the fact that there direct update information in apps icons. In WinSuitz, however, only the date and time are updated in this way.

The usability of the app, in turn, it is extremely simple and do not require any configuration or adaptation time for use. Finally, we can say that if you want to check how Windows 8 works before getting the news, check out the videos available on YouTube, where Microsoft itself publishes tutorials.

No installation required
Simple to use
Important

There has live tiles with actualizes
It is not full-screen 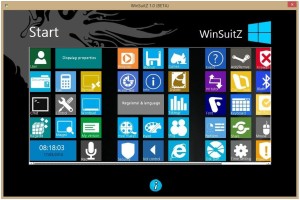