Charlaine Harris: Dying for Daylight is a puzzle game of pointing and clicking whose central story is a tale of vampires and the conflicts involving the group who lived in the city of New Orleans in the United States. Its mission is both to discover what happened in the region and establish the existence of an ancient potion, the target of desire for any of these creatures of the night.

The title is completely free and has several chapters and minigames for you to enjoy for many hours. The story has details that are revealed as you play, so that there is always something new to investigate.

Beware of extras
During the installation process, a screen offers one more item to the process. Here, you can turn on MyPlayCity browser homepage and search engine browser. If you do not want to make this change, simply uncheck the option available and continue the procedure normally (not offered more options beyond that).

The potion sun
The game begins with a report showing an elder vampire to his apprentice, Dahlia. There, it is said that one of these creatures invaded a wedding party in broad daylight, something that concerns the character. He speaks to the individual in question might have gotten the old “Sol Potion”, capable of making vampires can walk during the day.

So the old man sends his apprentice to New Orleans for clues, both to understand what is happening in the region and to find out if the potion is true. The game lacks a degree of difficulty you select, but it can be considered moderate, because some items are cleverly hidden in the scenery.

A journey through New Orleans
Entering the game itself, just explore a little scenario for you to notice how the title is quite similar with respect to other games of this style. Basically, all you need to do is observe calmly all the details shown on the screen, and locate objects of interest, which can be saved for use in another situation.

Moreover, you also need is alert to clues related to the story, which will be present from the beginning of the game. When you enter a room or explore an item, you can get a list of various objects to be located. In such cases, all you need to do to find these objects in the scene is click it.

This makes the element in question “disappear” from the screen and removed from the list. Sometimes, there are objects that are not complete or that appear repeatedly in the scenario. In such cases, you may need both “mount” them by dragging the pieces to a certain place as just finding the total number of them indicated in parentheses.

When you move the mouse around the screen and it changes to a hand, this indicates that you can manipulate any element. The pointer appears also customized for you to start conversations, observing objects and use vampiric powers. In the case of the investigation of the scene itself (and not a list of items), where an element is found useful, you are asked to keep it to use in another situation.

If you stay with problems to solve the problems presented in a given scenario or even to find an item in a list, you can use the existing system of hints in the game.
Review

Charlaine Harris: Dying for Daylight is a game of point and click with plot involving the investigation of a series of events involving vampires living in the New Orleans area. The difficulty of the game is moderate because some of the objects are well hidden in the scenery and, in some cases, can be really challenging to find them.

In addition, there are items that should be collected for further action and you need to be careful that they do not go unnoticed. Even if you do not have much experience with games of this genre should not have major difficulties to understand the workings of it. Another interesting point is that you need to pay close attention to detail to be able to resolve some of the puzzles proposed, it does not get tiring.

However, what can bring some difficulty is the fact that the list of items as well as all interactions and dialogues are in English. Thus, this can pose a problem for those who do not have much affinity with the language. The background music helps in soaking in the atmosphere of suspense and mystery proposed by the history of the game. 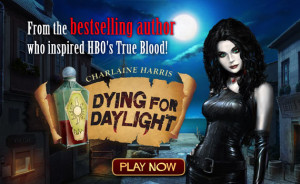