Intel Linux Graphics Installer is an open source program that allows you to install drivers for Intel video cards. With it’s easy to install and maintain the drivers of these cards in your Linux.

Anyone who has had to deal with support for video cards on Linux at some point felt difficulty when upgrading drivers or get access to some kind of setting them. The problem is greatest when it is unknown or facing plates and 3D games. Even those that are supported by the manufacturer, are sometimes problematic, but the installer will help you with this.

The program automatically adds a repository in package management and distribution system that in addition to installing the drivers, ensure receipt of future updates.

In addition to the drivers, the program also installs some extra files – which licensing issues – are usually not available by default on some distributions. A good example is libva driver that allows some programs to gain access to graphics acceleration.

With this installer, users of video cards from Intel will have a very practical and simple to install and maintain their systems with updated drivers from the official manufacturer, avoiding a number of common pitfalls in hardware without official support.

If you have a video card from Intel and uses a distribution compatible with the installer, do not waste time and download the Intel Linux Graphics Installer. 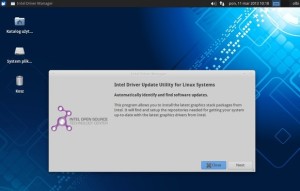