Have you ever imagined being able to talk with people around the world through the internet and without mastering any foreign language?

This idea may seem to you a bit fanciful at first, but believe me: this is exactly what suggests Skype Chat Language Translator and Speaker.

This is a free software that integrates with Skype  and has the ability to act as simultaneous translator for text chats by converting its written in for the pre-selected and vice versa language phrases. The program is compatible with over 57 different language packs (which must be downloaded and installed separately), including Arabic, English, Chinese, Catalan, French, Japanese, Russian, Serbian, Spanish, German and Korean.

And do not stop there

Skype Chat Language Translator and Speaker also has an equally interesting for those who want to expand their experience with the use of Microsoft Messenger secondary function. The add-on is able to dictate you all the text messages sent by your contacts in private or group chats, allowing you to follow a conversation without even looking at the software and read it in the conventional manner.

To enjoy this feature, you must also download the language packs for the languages ​​of the messages that you want the plugin for you to read. Each of these packages brings different voices (male and female) so you can customize the wizard the way that suits you.  Notice that it is perfectly possible to enable this functionality for more than one chat at the same time, including choosing a different voice for each conversation you keep it open.

Skype Chat Language Translator and Speaker is an exceptional program, and there is no doubt about it. Shame, for any reason, unable to install the Portuguese language pack for the feature to dictate messages, other than that, we did not find any other negative point that can be considered serious.

The simultaneous translator is something phenomenal. The program can translate phrases masterfully and with a much higher efficiency if compared with services like Google Translate or Bing Traslate. Obviously, some terms and sentences can still be converted wrongly, but yes it is possible to communicate with foreigners without major problems through this add-on.

The function of listening text messages also proved very effective and useful especially for the visually impaired. Again, we were unable to install the Portuguese language package for this feature, but tested himself with conversations in English and everything worked properly. It is a pity that it is necessary to click the “Refresh” button whenever you open a new chat for the add-on recognizes it and enable the functionality for it.

Furthermore, we must recognize that it would be really cool if Skype Chat Language Translator and Speaker had a more intuitive and pleasant interface. In matters of design, the program quite displeasing. A help document embedded in the software would also be useful, since the instructions provided on the official website of the tool are kinda confusing and did not help us much time to operate the utility.

In short, if you use Skype and want to communicate with foreigners – and learn some foreign languages ​​in the process – well worth downloading Skype Chat Language Translator and Speaker. 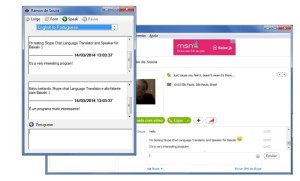