The victPaint is another free program that aims to be your number one choice when it comes to editing images. Small and easy to use, offers options to add effects to your photos, create new images or produce the famous animated GIFs. Also supports transparency and the use of layers, as major software category.

The tools available are the old known anyone who has already moved in this type of programs and aim to maintain familiarity both the more experienced user as the first-timer. Paint tools, text, selection and molds can be accessed in the image editor of the menu.

In addition to open and edit files in BMP, JPG, GIF, PNG and LIF formats, victPaint provides templates with a specific interface to ease the process of creating small animations. Dozens of effects can be accessed through the menus, since applying textures to change the colors of the image.

The layers, or layers, are present and facilitate when creating effects and design over the original image. You can work on each layer separately, change the order in which they appear or merge them into a single figure.

Because of the many features incorporated by the developer, the victPaint would be a complete tool, offering features similar to those of more robust software category. But after our tests, we could see that this was not reciprocated.

The program does not pass a professional air, as even its icon does not have one of the boldest design. On the very first run of the application, the screen blinked before forming the windows and toolbar. To move the frame to the picture library of the place, the trail was marked in the window screen, giving us hints of instability.

Following the visual, the program interface looks like a version of which was drawn in Paintbrush Paintbrush own, something very old-fashioned. Icons to select the tools have an appearance of clipart, and the tools themselves do not produce good results. The brush generates lines with faults and serrated, and control over the diameter of the trace is not very intuitive.

The menus are structured to resemble the style used in programs such as Photoshop or Illustrator , but the truncated interface already denounced that probably selected resources will not have the same quality as used by the Adobe suite. The rollover effects are even comical, applying textures with low resolution over the original image.

Lack of optimization tools and weak

The preview effects when available, it inoperable program for a few minutes, causing the CPU to use more than 50%. This ends up not being a very big change to the usual operation of the program, which when opened takes on around 40% of the processor. The memory consumption starts at 100 MB and grows exponentially as needed.

Add layers is not complicated, and delete the one that is currently active, but select the layers that are not visible (the program shows only one at a time) is done blindly, since there is no preview in the small menu available. A sidebar facilitate much more to work with this tool.

The template for creating GIFs, which could be a differential to the program, is also flawed. The process is not easy, the image size can not be easily changed and you need to save each frame separately before including them in the animation.

So when you have options like Pixlr and GIMP available for personal use, it is difficult to recommend the victPaint as a good choice of image editor. 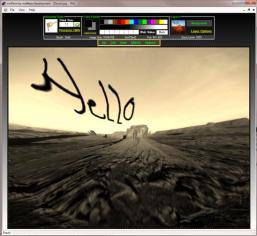