As long as you do with the photos we took with our phone (screenshots included), Dropbox now has the option to automatically back screenshots in Windows and Mac if you want.

With this, every time we make a screenshot (screenshot) on our computer using the default key for it, Dropbox will save a copy to have a backup of it in the cloud and then make it available in any of our devices linked to our account Dropbox or even access it from the web interface of the service. 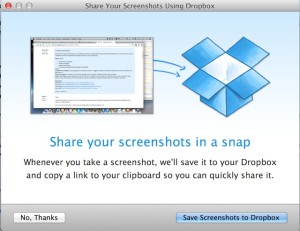 As you probably know, the basic command to make a screenshot in Windows is CTRL + Print Screen (Print Screen), while Mac OS X is CMD + Shift +3 , so after doing that, if we have the function enabled, Dropbox is available to save the screenshot we have made. Of course, this only applies to those functions of Windows and Mac to capture the screen and not to specialized software screenshot third , in which case, we must support the images manually if you want.

For Dropbox will automatically save screenshots, simply must go to Preferences and make sure the tab Import , is on the check box that says ” Share screenshots using Dropbox “(Store screenshots on Dropbox).

In this regard, users what Mac have a small advantage, since they have alternative command CMD + Shift +4 allows them to capture a selective area of the screen cursor helping. Additionally, this update of Dropbox also includes a small utility or importer to copy pictures from iPhoto directly to Dropbox .

To have these new features, just enough to update the Dropbox desktop application for Windows or Mac