Normally as new versions come out of the iPhone , the previous versions are slowly stopping being compatible with a considerable number of applications , mainly due to the fact of not being able to upgrade to new versions of iOS , which with the launch of iPhone 5S will passed to the iPhone 3GS that will stay a maximum with iOS 6.x .

Before, I went to the iPhone 3G , which can be up to version 4.2.1 of iOS , which left him dismissed in order to get many applications from App Store . 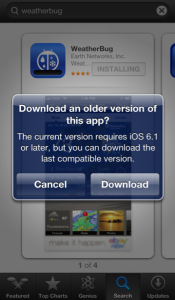 But now, the situation changes, because the older versions of the iPhone (and iPod Touch / iPad ) can install many apps that were no longer available to them , which is possible because the earlier versions of various applications are version available for iPhone and iOS that support them , that is, if for example, the most recent application WhatsApp is not compatible with the iPhone 3G or 3GS , to access any of these devices to the App Store will not be offered the newest app that you can install, but that the latest device support , which will give them a second wind.

Worth mentioning that there were applications where such devices were still new and previous versions do not have support , may not be offered , but either way the number of apps available will increase considerably and is good news for owners of iOS devices old.