If you really are a music fan, it is very likely that your computer is loaded with audio files in MP3 format. This is something good for the simple fact you rely on several songs available, but is also bad for the confusion data that the vast amount of music can generate.

To resolve this problem and even to generate economic playlists, so to speak, you can use a program called Freemore MP3 Joiner. It has the function of joining your audio files into only one, resulting in larger organization or facility to find that nice selection of songs, for example.

With a focus on quality …

According to the explanation of the software developers themselves, the Freemore MP3 Joiner was done in a way that you should not lose the quality of their music – after all, this would cause the joints do not serve their purposes. Because of this, the tool works with different parameters.

Firstly, you can make files of different formats from becoming only one. However, you should choose a language for the final compaction “giant music” has. Thus, no matter if the songs are in WAV or WMA as the final product was set to MP3.

The software also works with the bitrate of each song – in a very simplified explanation, this is the transfer rate of data that define the size and quality of the audio file. The program can merge everything into a single file, and you can set the desired average bitrate – you can choose the quality of the final result.

Besides all this, you can use the program in question just to change the format of your songs – just choose this option at the bottom of the software window. Thus, instead of uniting their songs, you will just convert them to the desired decoding, and the process takes a few clicks to make it happen.

If you’re wondering, know that the program converts your music to four different formats: MP3, WAV, WMA, and OGG.

The quality of Freemore MP3 Joiner that most stands out is its proposal. It is quite different and can draw attention of many people because of it, since it is useful for you to organize your playlists or even just to leave their “cleaner” music folder, so to speak (which already is an advantage).

The interface is not exactly pretty, but it is very functional. The software has only one window, but it is very clean and well-defined resources, preventing you from getting lost in a mess of information. This feature helps even people who are not accustomed to manipulating audio files.

No, not boycotting their music

Another positive quality that helps cited above is the fact that the use of Freemore MP3 Joiner is quite simple. You need a few clicks to join their tunes or convert them, which makes the software something really easy to use.

Besides all this, there are cool alternatives for you to regulate the quality and bitrate of your songs. Thus, the junction of your files will not result in something bad for their warning and even ruin their songs – and this is a great quality, showing that the tool is efficient and reliable.

It’s good but could be better …

However, it is clear that Freemore MP3 Joiner not only presents qualities. The first downside noted is the fact that the program has few tools. With that, however much its proposal is something different and that calls attention, the application will only be fully enjoyed by a segment of people, making the restricted tool.

The developers could have thought of enriching the work of your product with some important details such as place markers for determining when a song ends or begins, as simple alternatives to cutting and pasting audio editing. 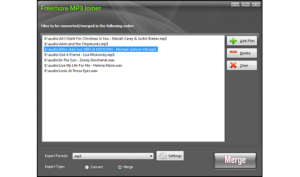